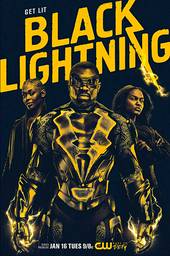 Black Lightning is a fictional superhero appearing in American comic books published by DC Comics. The character was created by writer Tony Isabella with artist Trevor Von Eeden, first appearing in Black Lightning #1 (April 1977) during the Bronze Age of Comic Books. While his origin story has been retconned several times, his current origin story states that he was born in the DC Universe a metahuman with superhuman abilities.

Born Jefferson Pierce, he grew up in the disreputable Southside section of Metropolis known as Suicide Slum. Returning to his hometown after an extended leave due to tragedy, Pierce becomes the principal at Garfield High School. Having suppressed his abilities since adolescence, he adopts his new alias and persona to combat the criminals and corrupt leadership in the area while protecting his loved ones from harm. He is capable of electrical manipulation and generation. Black Lightning is DC Comics' first African American superhero and the first to star in their own series for the DC imprint.

Tony Isabella, an experienced writer having done work for the Luke Cage character at Marvel Comics, was signed on to develop DC's first starring black character. He pitched the idea for Black Lightning and it was developed though only 11 issues were published in the first series due to the 1978 DC Implosion. However, the character continued to make appearances in other titles over the years, including a Justice League of America storyline in which Pierce is offered but turns down a position with the group. He does later become one of the founding members of the Batman-helmed Outsiders superhero team.

Pierce has two daughters with his former wife who are also metahumans. His eldest daughter Anissa, known as Thunder, can alter her density, rendering her almost indestructible and create shockwaves by stomping the ground. Pierce's younger child Jennifer, also a superhero known as Lightning, has powers almost identical to her father though she is still inexperienced and not in full control of them. A common misconception is that Pierce is the father of fellow superhero Static, who debuted much later and possesses similar abilities. Pierce addresses this coincidence in a Justice League narrative.

Along with his presence in comics, Black Lightning has made various appearances in DC-related animated television series, video games and comic strips. The character is being portrayed in live action for the first time by Cress Williams for the self-titled television series, a production of The CW network. In 2011, he was ranked 85th overall on IGN's "Top 100 Comic Books Heroes" list.